After a 5 mile ride up the South Halfmoon Creek trail we made it to the site of the Iron Mike Mine on the Susquehanna mining claim. The last few hundred yards we rode in a gentle snow storm that almost immediately melted on the ground as it turned to rain. At the mine site itself we found two buildings. We are sitting on the remains of a large log cabin on the north east edge of the claim. The other building has collapsed and is off to the right. The north slope of Mount Elbert can be seen in the background.

The 4WD trail can be seen following the broad valley of South Halfmoon Creek as it climbs up to the mine. It was built to service the mine works and the excavations at the end of the trail that lie north of the label "Prospects". The "X" symbols mark those excavations. 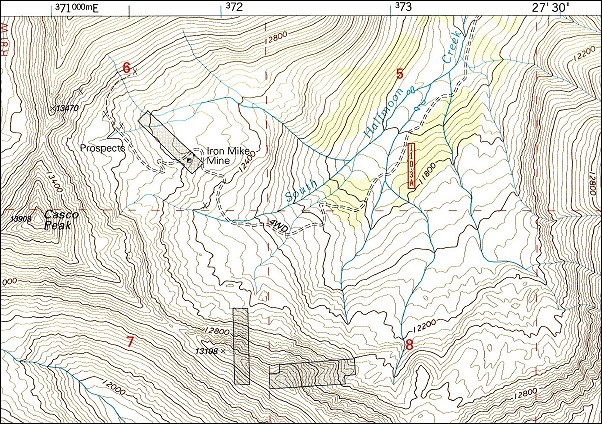 Two buildings remain. The log cabin just off of the NE edge of the claim can be seen in the background. It is littered with old breeze blocks and debris, including cans and fittings from the building.

The building in the foreground is probably of later construction as it is frame built of finished lumber. It has completely collapsed. The ground between the two buildings is covered in mining debris such as pieces of cable and metal fragments. 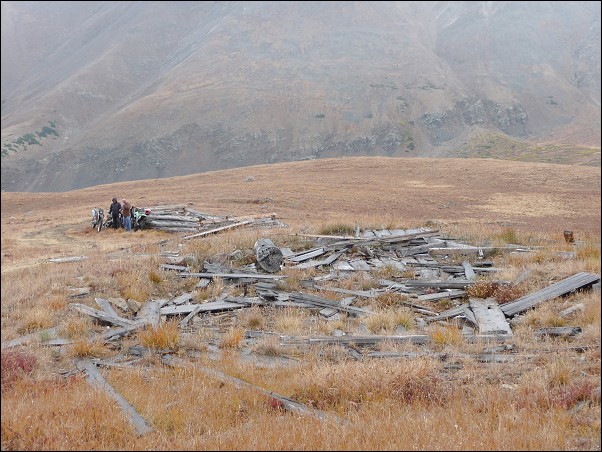 The aerial photograph clearly shows the trail leading to the mine. The approximate boundaries of the claim are highlighted in orange.

There are three features that can be clearly seen on the ground and also appear in the aerial photograph. The log cabin apparently lies just outside of the actual claim boundaries on the bend in the trail. A collapsed building lies on the NE margin of the claim, and the actual mine shaft and spoil heaps lie in the center of the claim at the SE end.

My red outfit was carefully chosen to colour coordinate with the lime green Kawasaki dirt bike leaning on the cabin wall. 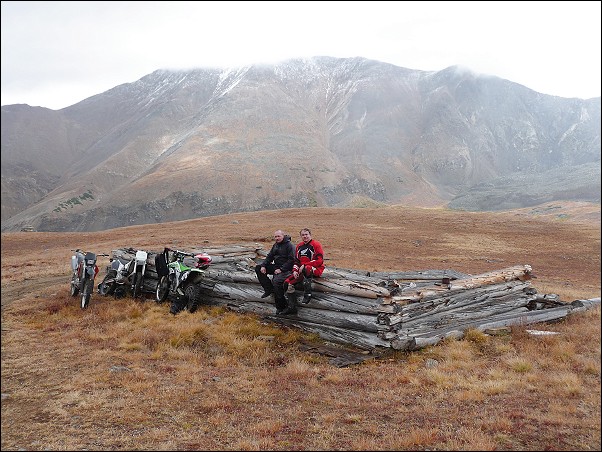 Looking east from the claim boundary down the Halfmoon Creek drainage. The 4WD trail to the claim comes up the valley floor through the narrow gap seen in the far distance.

The town of Leadville lies off to the east in the far distance. It is located just to the left of the valley opening but is lost in the clouds.

This view is from the mine workings and the mine shaft, looking NW down the line of the mining claim. The claim extends almost all of the way across the shallow valley to the far side.

Here's the remains of the mine shaft. The sides of the shaft were lined with timbers, and the shaft itself has collapsed and is now filled with rubble.

The bikes and people are standing next to the log cabin, and the collapsed building is in the near distance to the left. 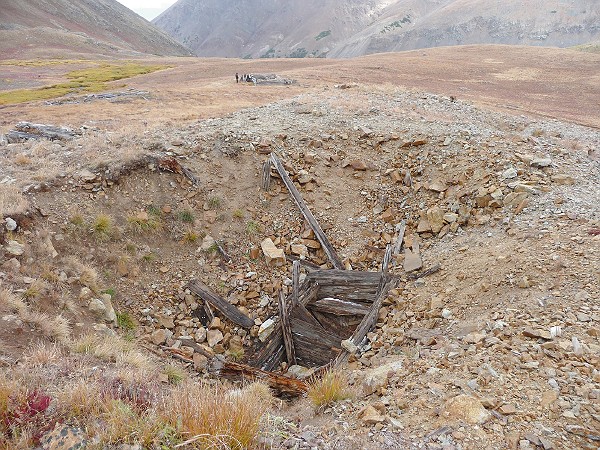 Next to the shaft are two buried wooden barrels, and beyond that the mounting bolts of some kind of winch that was used to pull rock up from the shaft. The overhead gantry that would have been above the shaft has disappeared, but there are some large fragments of big timbers lying around that may have once formed part of it.

Looking west up the road that continues from the mine and winds its way to the far slope. The road can be seen on the left edge of the photograph, and it snakes its way along the low rounded ridge in the middle distance. There are a number of excavations in the far hillside at the end of the trail. The trail ends at the scree slope.

On the NE edge of the claim boundary is a building that has completely collapsed. It was a frame built hut or shed with planking on the walls. The lumber used in this building was all machined or finished lumber, and this was probably a building that was erected somewhat later than the more substantial log cabin seen in the distance.

The north flank of Mount Elbert is in the distance with the 14,443 ft peak just shrouded by the clouds. 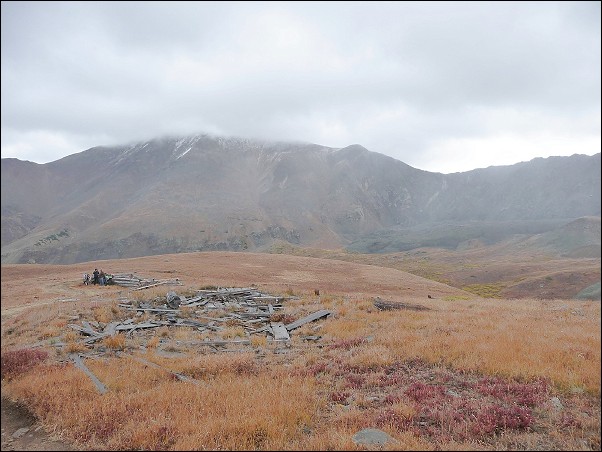 We won't be coming back until next year... there are probably a few inches of snow now covering the ground. It rained on us all the way back down the trail, and by the time we got to the truck it was pouring and cold. Perfect timing! 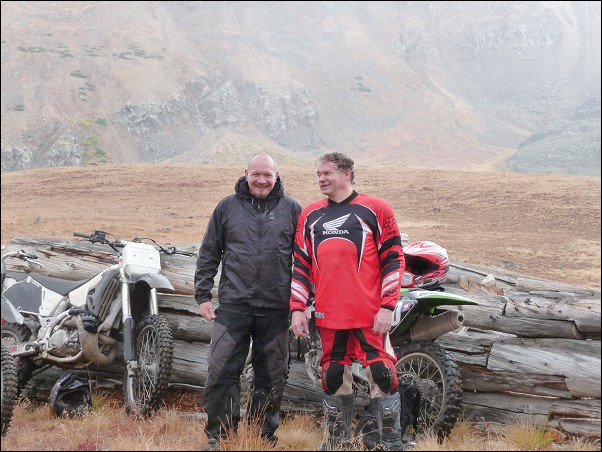